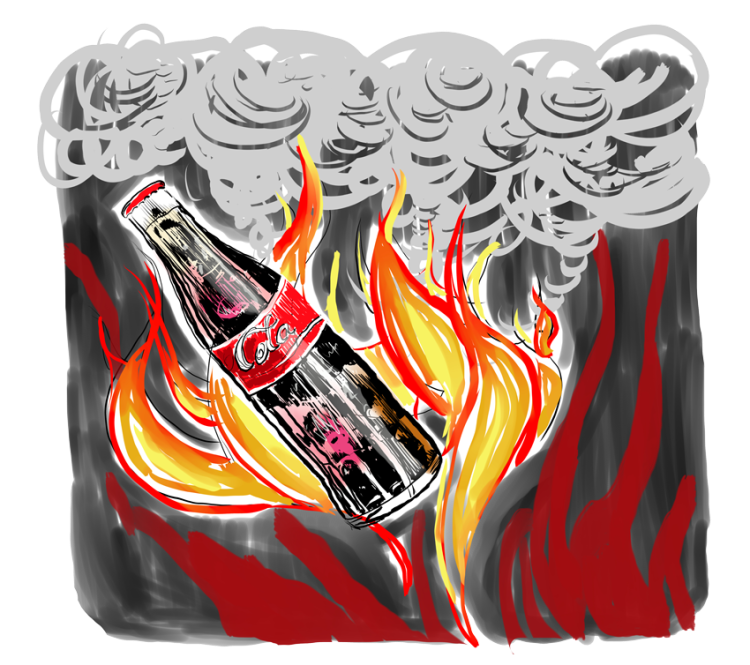 Bills are stacked so high in the room that they take the place of furniture. From under a pile crawls a man. He picks up one of the few letters without dollar signs.

“I’m leaving you,” it says. He throws it with the rest of the junk.

His cat has died facedown in its food dish. He winces as he looks it over, unsure how he’s going to deal with the remains. He decides to worry about it later.

He opens the refrigerator. It is empty, except for a colony of bees that has taken it over. He closes the door as their humming intensifies.

“Don’t bother coming into work tomorrow,” plays a voice in his head.

“Your father and I are very disappointed in you.”

An eviction notice slides in from under the door. He lights it on fire and throws it on top of the rest of the paper.

From the inferno comes a figure made of smoke, well-dressed and red. “You’re just about to give up, aren’t you? I can help if you want. I can give you your heart’s desire.”

“Give me a Coke,” he says. It bursts into his hand. As the sirens approach, he gulps in down in one go, as though it is medicine.

Coca-Cola: Your Only Responsibility

Facilitator and Proprietor of Tales of Insecurity, a podcast of post-modern existential horror. I like to make the best of a bad situation, and also to make better ones. I'm here to be helpful!

This site uses Akismet to reduce spam. Learn how your comment data is processed.